Rose and I created  Nothing to Say in 72 hours for Ludum Dare #45 in October. We're really happy with how it turned out - the design of gradually unlocking letters to gain access to new dialogue options resonated really well with the idea of a shy character struggling to express themselves.

That said, there were a few issues that were mentioned in LD comments or have surfaced since them, and this weekend I finally put some time into thinking through the problems and fixing what I could.

Problem 1: It's not obvious when the game ends

You win the game by successfully telling Zoe how you feel. After winning, we wanted to offer the option to play more and explore other dialogue options, so we added a Start Over button.  But it wasn't clear to everyone they had actually won at that point, and it probably felt confusing rather than satisfying.

Solution: Say "THE END" at the end

This was a simple one. I added THE END at the end. (I also changed "Start Over" to "Play Again", which is clearly better and should have been like that all along!) 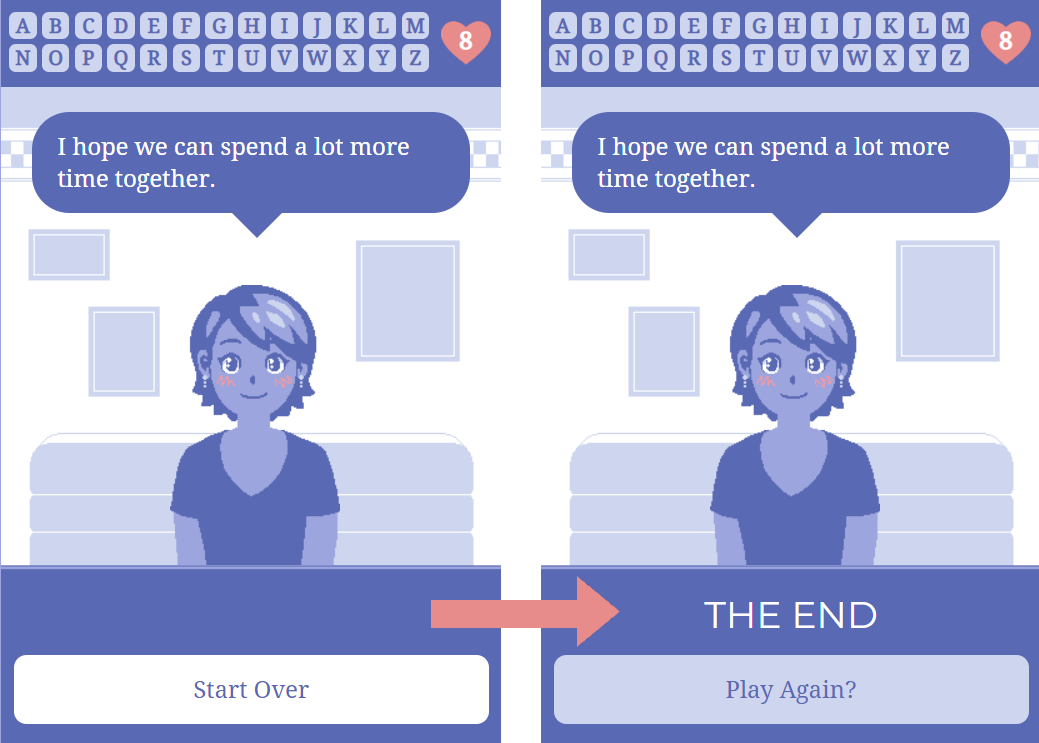 Also, if you already have all 26 letters, the letter-buying screen is now skipped on any subsequent playthroughs, which hopefully removes a bit of confusion during any post-confession exploration.

Problem 2: The mechanics of the final part of the conversation are not clear

Nothing to Say is a mechanics-based games: you need to get hearts to unlock letters to progress. The end of the conversation is supposed to reflect how you did in that playthrough - in other words, to translate the mechanical situation into Zoe and the MC's feelings.

In the logic determining the final part of the conversation, there are actually two different point totals that matter: points representing how happy Zoe was with the conversation, and heart points that can actually be used to buy letters. Both are factored into the logic for what Zoe says at the end, and then there's a separate calculation for the MC's final thoughts.

That all made sense to me when writing the conversation logic in Ink, but it's totally confusing to the player. The first point total is not visible to the player (unless you're making tally marks every time Zoe blushes), so the different endings are unpredictable. Plus, you could end up being unable to confess at the end despite having all 26 letters, because that option was only available if you scored enough hidden points on that playthrough.

I cut the original ending conversation logic down to just three options:

I also made some changes to what the MC says at the end of each option to help clarify what's going on. For example, in the pity point ending shown below, the MC explicitly says "I wish I'd brought up some new topics of conversation..." to hint you need to be exploring new dialogue branches to get hearts.

It's a balance between preserving the fiction of the game and not leaving people confused about what's going on mechanically - I think this version is better than the original, but I appreciate anyone's thoughts.

Problem 3: Some dialogue options are unappealing

When playing a dating sim, your instinct is to choose the "best" option to win points with your love interest, right? In Nothing to Say, it's hard to pick a "best" option - they're all quite terse, and it's impossible to predict how deep the branch is and how many possible hearts are hiding within it.

Our intent was that no options are better or worse - the goal isn't to win any one playthrough, but to explore the conversation and get to know Zoe over multiple playthroughs. But unfortunately, a lot of content is hiding behind options that seem worse than the alternative, which players may not want to choose.

The worst offender, which unfortunately is also in the first choice you see, is commenting that the restaurant is "Not my thing." If you choose that option, Zoe and the MC have a conversation about other places they could go - it's fun and could score a lot of hearts. But I suspect that players will hesitate to choose an option that sounds negative.

Why does the "Not my thing" option exist? Because I was searching for a dialogue option that was clearly just a few letters in addition to NOTHING. Letter progression was a big motivator behind a lot of the options, which was helpful for brainstorming, but led to some awkward or less appealing choices.

Nothing to Say was made in a weekend, and between plotting out dialogue options based on unlocked letters and coding the actual game, there wasn't much time for polishing the script. It could definitely use a significant revision, not just to balance the options and replace ones that sound unappealing, but just in general to improve the dialogue.

But I'm not going to do that. After-the-fact tweaks aside, this is still a jam game, and I would feel weird making script changes, even if it was just one dialogue branch. Even if certain dialogue options are awkward, I hope players have chosen them and been pleasantly surprised by the results.

Those are some of the issues I've been thinking about! The actual changes were subtle, but I hope they help make the game less confusing and more fun. I'm definitely curious to hear reactions to the updated version.